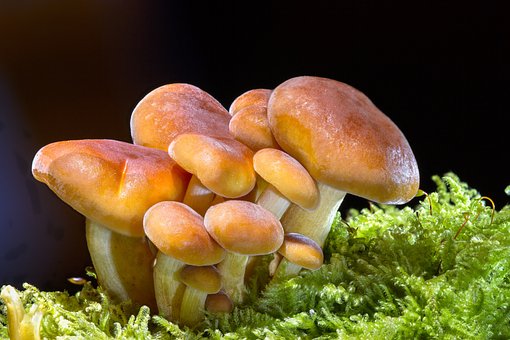 They are fleshy plants which grow from decaying materials. They need the nutrients they get from the rust because they do not have chlorophyll. This means that they can’t produce their own food. They usually grow in the temperate areas of the world and throughout the seasons when the weather is moist and warm. Mushrooms can probably be found in pastures, meadows and woodlands. There is a wide array of mushrooms and they have many unique colors. Some mushrooms are brown or white while others are orange, red, or in shiny pastel colors. They also differ in shape and sizes. The most common mushrooms are short with thick stems and caps that look like umbrellas.

The gills grow between the cap lining and the stem. These gills house the tiny spores that grow as the mushroom ages. In time, these spores grow into new sets of mushrooms exactly like the seeds of other plants do.

However, there are different kinds of mushrooms, such as those commonly called”toadstools”, that are poisonous when consumed. Also others may not be poisonous but are still inedible because they are either too difficult to chew or simply don’t taste good enough to be served. For mushrooms which grow in the wild, there is no rule or completely safe way to differentiate which is edible or not. This is because the poisonous ones seem very similar to those that are edible. To be safe, leave the wild mushrooms and buy them from the grocery stores and markets. There are markets in some European countries which sell wild but safe mushrooms. The more popular kind of wild mushrooms are the”morels” that have unusually pitted sponge-like heads. Also popular are the”horse mushroom” which looks a lot like the frequent mushroom but has an added collar round its neck and those called”puffballs”. These puffballs are perfectly round mushrooms which have no stems or gills. They could be very little or reach until 3 feet in diameter. These mushrooms are only good when the flesh is all white because if a dried puffball is squeezed, its spores will burst out like a puff of smoke.

The edible kinds of mushrooms can either be cooked with other ingredients or eaten by themselves. They are usually paired with meat, combined with other vegetables, or made into soups or sauces. Mushrooms are easy to prepare because they don’t need peeling and both the stem and the cap may be used. However, they ought to be used only when fresh because they spoil easily. But today, there are mushrooms that are grown and then canned, frozen, or dried which have longer shelf-lives.

Raising mushrooms is typically done in caves or indoor containers that always kept moist and cool. These mushrooms are filled with partly decaying flesh of animals or plants. On these decaying materials, mushroom spawn or root growth are planted. The mushroom grows rapidly and would soon fill the entire bed with tiny threadlike rootlets. The stems and caps of the mushrooms do not sprout unless those rootlets are well grown. The main sort of mushroom grown is the”common mushroom” or the”field mushroom”.